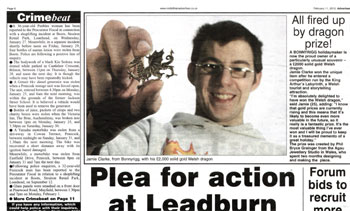 Welsh storytelling attraction King Arthur’s Labyrinth has been celebrating some high-profile PR in Scotland thanks to the Holyrood PR.

The tourist attraction was featured in the Midlothian Advertiser after presenting a £2000 gold dragon to a lucky competition winner in Bonnyrigg.

King Arthur’s Labyrinth ran a contest over the summer months, where visitors were invited to enter a prize draw for the hand-crafted, gold Welsh dragon. Midlothian man Jamie Clarke emerged victorious in the contest, beating thousands of other entrants to the prize.

The coverage appeared in the Midlothian Advertiser and was the result of a specialist Scottish PR and social media campaign maintained by the Holyrood PR.