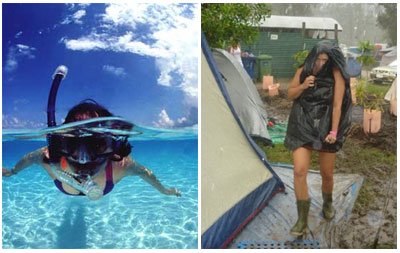 This year’s summer holiday will be in a campsite in France.

I’m sure it’ll be magic, but it’s just not got the same ring as Bali, the Maldives, or Mauritius.

Last week my thoughts turned to the kinds of sun-kissed paradise blessed with blue ocean, white, sandy beaches, and a laid back lifestyle.

That’s partly thanks to a video we made promoting the company’s work wear and uniform design services, which helped catch the eye of an influential Scottish business ambassador in the Caribbean.

NKD Clothing boss Gill Eastgate has already spent much of this year travelling all over the UK chasing down potential new business – so I’m sure a “business trip” to the Caribbean would be a welcome change.

Which set me daydreaming – what if Scottish PR companies could land lucrative PR contracts in far-flung and exotic locations like the Cayman Islands?

Ker-thump. I was dragged out of my reverie by a colleague dumping a copy of The Herald on my desk and demanding: “Haw bawzy – how come you cannae land contracts like that?”

Talk about cruel timing. There it was staring me in the face. The headline I’d been dreaming of:

So… *choke*… congratulations to Media House in Glasgow. A four-strong team led by the agency’s executive chairman (and former newspaper legend) Jack Irvine has been tasked with polishing the tarnished reputation of the Caymans.

Apparently the islands have been coming in for flak because, in the depths of a global recession, some people don’t like to see the super rich living in a tax free paradise.

Sounds like a really, (naw, really) dirty job and I’m sure the Media House team will hate every minute of it.

Then another thought crossed my mind:

The Cayman Islands are a haven for super rich ex-bankers. Ever since the witch hunt started against Fred Goodwin, rumours have been flying that the disgraced former RBS high heid yin wants to move his family out of the UK.

America is a more likely venue for Fred the Shred – but maybe, just maybe he’ll be plumping for a new life in the tax-free jewel of the Caribbean instead.

So while I might have turned a shade of green on learning of Media House’s good fortune, I consoled myself by imagining the colour Fred the Shred would turn at the thought of another bruising encounter with Jack the Ripper.

Mibbes paradise isn’t all it’s cracked up to be.