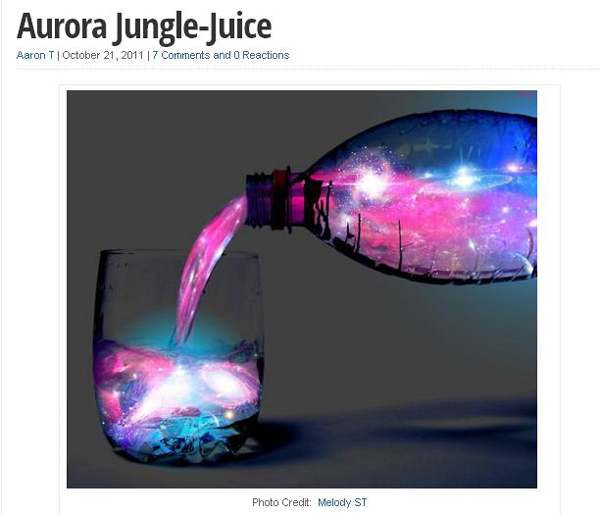 If you liked our links, why not give us a shout on Facebook, Twitter, LinkedIn or Google+.

If you like your cocktails then this is one concoction that should feature at every party. Some of the most basic bar materials turn into glowing pieces of mini-art when held up against black light. The guys over at The Campus Companion created a drink that is pink in natural light, but glows aqua-marine under black light and has been likened to the aurora-borealis due to it’s magnificent colours.
http://www.thecampuscompanion.com/party-lab/2011/10/21/aurora-drink/

Looking in to the future – through some persepex… Or, should I, say Polyvision Privacy Glass. Polyton Technologies has releases a futuristic-looking prototype for what it hopes will the first ever transparent smartphone. Made from Polytron’s Polyvision Privacy Glass the product is isn’t completely see through as the Sim card and batteries are visible. According to Polytron’s website, “the liquid crystal molecules line up, the incident light passes through, and Polyvision looks clear.” Seeing as I still don’t have a regular iphone I don’t think I’ll be wishing this on to the shelves any time soon.
http://mashable.com/2013/02/16/polytron-transparent-smartphone/

I like to think I coined the term, ‘earworm’ for a word, phrase, song lyric or sentence that you just can’t get out of your head. Although a quick Googling has just dashed this…
Anyway, if your earworms drive you cuckoo, then spare a thought for 63 year old Susan Root from Essex who has had 1950s classic ditty ‘How Much is that Doggy in the Window’ playing continuously in her head for THREE YEARS. Susan has been diagnosed with a form of tinnitus called ‘musical hallucinations’ and has also been tortured by ‘Happy Birthday’, ‘God Save the Queen’ and ‘Auld Lang Syne’ in the past. I will take Taylor Swift any day.
http://www.telegraph.co.uk/news/newstopics/howaboutthat/9870233/How-much-is-that-doggie-in-the-window-Woman-cant-sleep-because-she-cant-stop-hearing-hit.html

I PROMISE I WILL WALK HIM EVERY DAY (Melissa)

If the “Monday Blues” really has you down and you need a small pick-me-up, then look no further than this album of adorable photos.
A Japanese boy and his French Bulldog spend all their time together showing that a dog really is a man’s best friend. They play, nap, read and even solve puzzles together while sharing a special bond with each other. So even these snaps don’t help shake the Monday morning mood, it will increase your need and want for the cutest dog ever.
http://www.buzzfeed.com/erinlarosa/japanese-boy-and-his-french-bulldog-are-the-worlds-cutest-fr

Ever heard yourself in the shower and thought “BAM! I should be an international star, singing jingles to a popular Australian soap?” Well, today is your lucky day.”Neighbours Remixed” will see 5 singers from the UK and Australia shortlisted to sing the new theme tune for the Channel 5 soap, with viewers picking the winner. The lucky candidate is then flown to Melbourne for a sing-off showdown with their Australian counterpart. So if you are over 18 and think you could put a fresh spin on “Neighbours, everybody needs good neighbours”, pop on over to their site to lay down some vocals.
http://neighboursremixed.channel5.com/