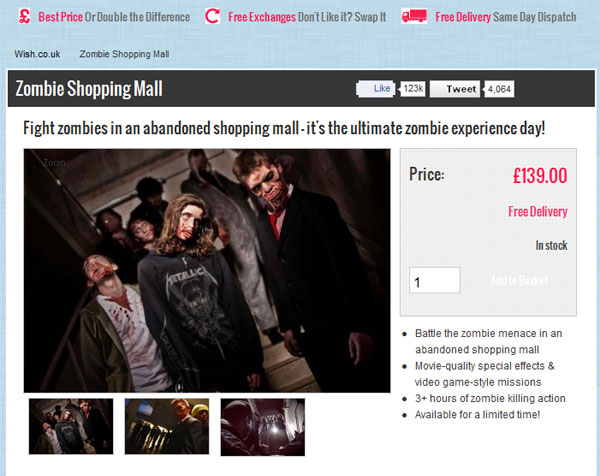 Lover of all things zombie related but find it’s not enough to get your lot from countless comics and big screen flicks? Well now is your chance to battle the grisly flesh eating monsters for real in an abandoned shopping mall in Reading! Intrigued? You should be this sounds a pretty outright bizarre but amazing day out sure to fill you with adrenaline! Using Airsoft guns you will be immersed in a shopping mall ridden with zombie characters in a epic 3-hour battle!
Got to laugh at the first question on the page: “Can I bring my own weapons?” What was he planning on bringing? Shotguns and axes! Mental!
http://wish.co.uk/zombie-shopping-mall/

SLEEPING WITH THE FISHES (Sarah)

A student form Paisley has come up with an innovative new burial method he has named the ‘aquatic grave’. Andrew Tibbles developed the idea because he wanted to allow people to give back to nature after they passed away. Backed by Professor Sue Black, a renowned anthropologist, the 22 year old believes his scheme could generate unprecedented nutrition for small marine life. Andrew, who is in his final year of product design at the University of Dundee, has developed fully contained, degradable coffins that can placed just below the waters surface and will allow fish to snack on the decomposing remains inside. Although some may find this concept morbid I think it’s a great idea, definitely something I will be looking into nearer the time!
http://www.dailyrecord.co.uk/news/scottish-news/2012/05/25/student-comes-up-with-new-method-of-burial-sleeping-with-the-fishes-forever-86908-23872956/​

On a royal visit to Canada this week to mark the Queen’s Jubilee Prince Charles learned to mix and scratch vinyl.  He joked, “The days of disco are long gone.”  Yes Charles, the kids want techno!  Prince Charles really puts me to shame!  After spending years on the decks trying to learn to DJ I’m still hopeless but the 63 year old future King got it right first go and got cheered on by the audience.  That’s my credibility right out the window then….
http://www.telegraph.co.uk/news/uknews/prince-charles/9283958/Queens-Diamond-Jubilee-Prince-Charles-turns-DJ.html

There is a certain snobbery which comes with fashion and this stunt by Prada certainly shows that. Debuted at Cannes film festival last night this short film produced by Roman Polansky features film stars Helena Bonham Carter and Sir Ben Kingsley- who both are enough to confirm the snobbery of it all. Sir Ben acts as the long suffering physiatrist of Helena who is an extremely wealth rich woman complaining of her loneliness. However Sir Ben seems to get tired of her moaning and goes to try on the lady’s lovely looking fur coat. The tag line that follows ‘Prada Suits Everyone’ is what really makes this a snob piece. Although the short film is animated and amusing the message is not true. Prada does not suit everyone; it suits only the rich that can pay the price tags. Not that I’m jealous or anything….
http://www.brandingmagazine.com/2012/05/24/a-therapy-short-film-by-prada/

We are slowly moving towards a cashless society it seems, with most payments being made via a quick flash of plastic.
So when it comes to getting a bus in most UK cities, apart from the TFL network, it is a real struggle for many people to come up with the shrapnel for a fare.
When I visited Sweden last year and used a bus, I was amazed to see people holding up their phones to the driver as payment. I later discovered that it all you have to do is text a number and you are issued with a text ticket. Genius!
And now, Britain is now set to follow suit by introducing a similar system. Passengers using the Stagecoach network will be able to download an app on their smartphone and pay their fare through it.
Let’s hope Lothian Buses catch wind of this!
http://www.dailymail.co.uk/news/article-2149662/Use-phone-train-ticket-New-app-allow-travellers-pay-tap-technology.html ​​