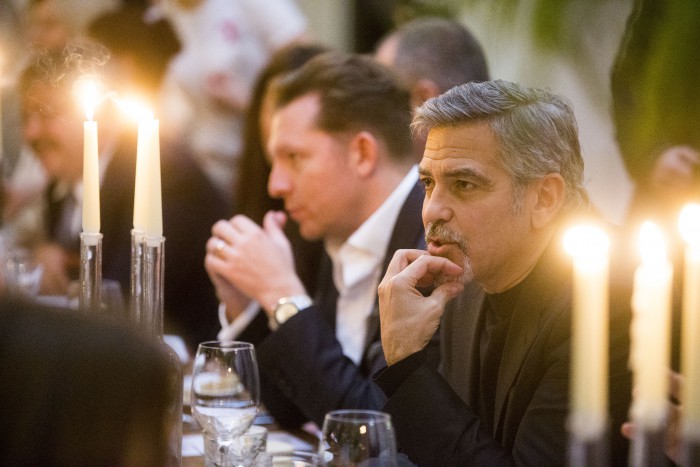 LUCKY diners got a chance to rub shoulders with George Clooney after management at Tigerlily refused to cancel bookings that clashed with his surprise appearance.

The George Street had taken more than 20 table reservations for lunch before they were told that the Hollywood superstar was to be guest of honour at the restaurant during his whirlwind stay in Edinburgh.

But instead of taking the decision to close the restaurant to customers outside of the VIP invite-only party, it decided to honour the bookings – providing an unexpected treat for diners.

David Johnston, Development Director at Montpeliers Ltd, the bar and restaurant group who operate Tigerlily, said: “It might have been expected for us to bow to pressure from security staff to keep the restaurant exclusive, but we did not want to disappoint any of our customers who had made previous reservations.

“So it meant that as well as diners having to get a feel for what it is like to be a celebrity when they had to walk past photographers and onlookers to enter Tigerlily, they also had the chance to rub shoulders with the man.

“It was a great and unexpected treat – especially for many of the female customers.

“They were able to walk over to where he was, take pictures and try to have a word.

“I’m sure many of them couldn’t believe their luck and would have been posting all sorts of comments on social media.”

Around 25 guests were invited to the secret lunch, including Heather McGowan who won a charity competition to dine with the actor, which was organised at Tigerlily as part of a series of events involving Clooney and social venture Social Bite.

Clooney told staff who served him a Scottish-themed five course lunch that the food was ‘all lovely’.

As well as the lunch, Tigerlily also had a number of the VIPs taking part in the Scottish Business Awards staying the night, including host, comedian Rob Brydon, TV’s Chris Evans and his wife Natasha, cycling hero Sir Chris Hoy and business guru Sir Tom and Lady Hunter.

Montpeliers Managing Director David Wither said: “We have been fortunate to welcome a number of celebrities and well-known names into Tigerlily, but George Clooney pretty much is as big as it gets.

“While we are always delighted to welcome VIPs in normal circumstances, in this case it was a really pleasing to play host to such a superstar visitor as well as helping such a great cause as Social Bite.

“We also heard from our staff that he said we had ‘quite a place’ in Tigerlily, so that was great to hear.”

Are you looking for hotel and hospitality PR support?