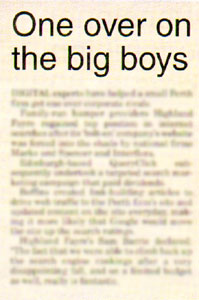 A David and Goliath hamper battle has resulted in some giant PR Scotland for QueryClick in Perth based publication.

The Perthshire Advertiser had featured an article on ChristmasHamper.com online success thanks to a targetted Search Engine Optimisation (SEO) campaign carried out by digital experts QueryClick.

Boffins at QueryClick were aproached by the Perth based family run hamper comoany after noting a drop in their search engine rankings, due to some nifty SEO from corporate giants Marks and Spencer and Interflora who knocked the local company off the coveted number 1 Google spot.

The Edinburgh based digital company then undertook a targetted SEO and search marketing campaign which allowed ChristmasHamper.com to climb back up the search rankings.

Targettd back linking and consistent updating of content each day made it more likely that Google would look over their site allowing them to sit ahead of their rivals within just a couple of weeks.

Sam Barrie at Highland Fayre quotes in the article: “The fact that we are able to climb back up the search engine rankings after a disappointing fall and a very limited budget really is fantastic.”

The full article appeared in The Perthshire Advertiser and was secured as part of a sustainable PR campaign carried out by the Holyrood PR.