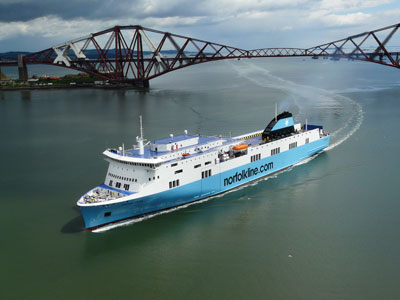 DFDS Seaways (formerly Norfolkline) has announced its ferry route running from Rosyth, Scotland, to Zeebrugge, Belgium, is to undergo a major change of operation to provide an enhanced freight service.

DFDS Seaways is to increase sailings from each port from three departures a week to four and will now operate two ships on the route, allowing freight capacity on the service to be improved.

However, the route will no longer operate as a combined passenger and freight service.

DFDS Seaways said that as the current combined concept has been a constant loss-maker, and with no prospect of the position changing in the longer term, it has been left with no option but to withdraw the passenger service from mid-December 2010.

While bookings over the summer have been and are still good, passenger numbers – despite the enthusiastic efforts by DFDS Seaways staff – achieved only of 60% of expected overall volumes for the year.

Andreas Teschl,  Vice President  of the DFDS Group, said: “We are aware that the ferry service has provided an important link between Scotland and the continent so it is a matter of deep regret that we have had to take the decision to no longer operate passenger services on the Rosyth to Zeebrugge route in the future.

“We know this decision will be disappointing to many people and we would like to thank all those who have supported us, particularly the Scottish Government, the travel and transport industry, as well as those passengers who have used the service and will continue to use the service until the end of the year.

“We can guarantee that the service will continue to provide a passenger service up to and including December 15 at least.

“However, we do believe the route has a future as a freight-only service and we not only want to keep the route alive but we want to enhance the service we offer to the freight industry.

“The service has been popular with the Scottish transport industry, who have recognised the benefits of the route providing the only direct link between Scotland and  the continent.

“As a result, we will now be improving the service by providing two ships on the route and four sailings from each port each week, all of which will dramatically improve capacity.  This new freight-only service will start once the passenger services ends in mid December, accommodating additional trailers, containers and up to 12 truck drivers per departure.

“This will provide freight operators with enhanced scope to reduce their environmental impact and transports costs by avoiding the need to make long motorway journeys.

“We will of course continue our talks with the Scottish Government in order to find possible, economically viable solutions to introduce a passenger service in the future.”

DFDS Seaways will continue to operate three sailings a week between Rosyth-Zeebrugge on the Scottish Viking.

Bookings can still be made for travel up to 15 December 2010, but any passengers who have made bookings after that date will be refunded.

The Scottish Viking will be replaced by two Ro-Ro ships which specialise in freight transportation.

DFDS Seaways is also discussing future employment options with the small number of staff who will be affected by the change of route operation.