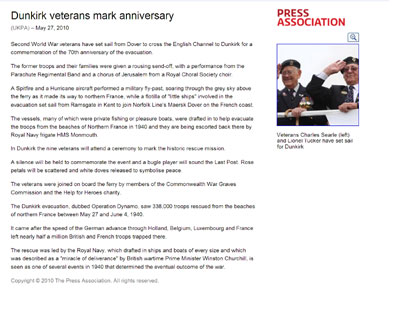 DFDS Norfolkline’s offer to provide free travel for Scottish war veterans has been picked up by a national news provider.

Under the headline “Dunkirk veterans mark anniversary” the article details DFDS Norfolkline’s involvement in the 70th anniversary of the Dunkirk evacuations.

The offer was made in conjunction with the Dunkirk Evacuation 70th anniversary weekend and allowed former service men and women to travel to the site where they were saved during the Second World War.

Norfolkline’s ferry sails to Zeebrugge which is only an hour from Dunkirk – and with the offer veterans could travel with three members of their family as well as a car to make the short journey once off the boat.

The full article can be read on the Press Association website and was secured as part of a succesful PR campaign carried out by the Holyrood PR.