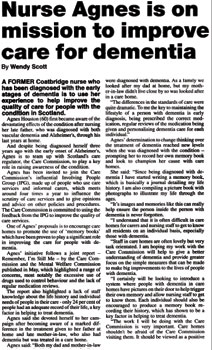 The Airdrie & Coatbridge Advertiser ran a story about how Agnes Houston, a former nurse who has been diagnosed with the early stages of dementia, is set to use her experience to help improve the quality of care for people with dementia by joining the Care Commission’s Involving People Group.

Agnes will join the group, which meets around four times a year to influence the scrutiny of care services and to give opinions and advice on other policies and procedures. The initiative follows a joint report – Remember, I’m Still Me – by the Care Commission and the Mental Welfare Commission published in May, which highlighted a range of concerns, most notably the excessive use of drugs used to control behaviour and the lack of regular medication reviews.

The full coverage appeared in the Airdrie & Coatbridge Advertiser and was the result of a dedicated Scottish media strategy implemented by Edinburgh public relations agency the Holyrood PR.