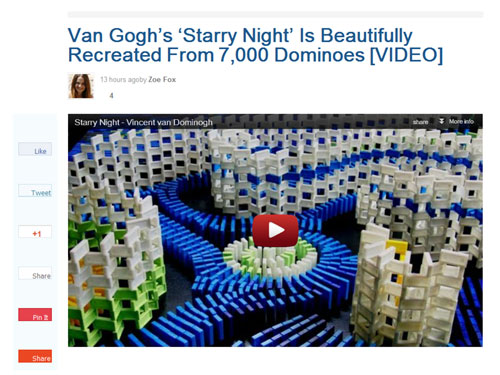 AND YOU THOUGH DOMINOS WERE A PUB PASTIME? (Scott)

Blame Roy Castle. It was him and the Record Breakers show that got me hooked on massive domino pile ups as a kid. This video of artists using coloured dominos to recreate one of Van Gogh’s greatest works is sublime. It also started a conversation here in the office. While playing doms in Scotland, if you knock on the table because you can’t play, then you are “chapping”. What’s it called in other parts of the English-speaking world?
http://mashable.com/2012/06/24/starry-night-dominoes/

Scotland is to brace itself for the big slime with the arrival of an increasing number of garden slugs due to the endless wet weather! The news isn’t good for fruit and vegetable farmers as the slugs munch their way through plants and soft fruits!I used to have a pet slug when I was five but after letting it loose in the hoose my granny unfortunately threw my wee friend over the garden wall!Did you know that slugs can develop up to 27,000 teeth and can eat twice their own body weight every day!?
http://www.deadlinenews.co.uk/2012/06/24/wet-weather-causes-scottish-slug-population-to-double/

Pre flight safety demonstrations often struggle to hold my attention, and I usually switch off after a couple of minutes thinking that I have seen it all before.If you fly on Air New Zealand however you may find that their videos are a little different, and in the past the national carrier has adopted some unusual attention to capture your attention including naked flight attendants and Kiwi rugby hunks.You can spot the likes of Snoop Dogg, Barack Obama and the Queen in their latest video – granted just hand sketched animated versions but a very unique concept all the same!In conjunction with this, the airline has launched a competition where people who identify more than five of the celebrities in the video can be in to win an amazing round the world trip for two.Get watching!
http://www.thedrum.co.uk/news/2012/06/21/air-new-zealand-launches-hand-sketched-celebrity-safety-video

Why does the picture of the burger on the advertisement never look the same as the burger you get when you buy it? The same question could be asked for a lot of product advertisements and not with just food. McDonalds Canada decided to answer that question with a short but insightful video showing the process of the photo shoot of a burger.We see how they use the same food as in the restaurant but take more care over placing the onions and sauces, which are placed on using syringes. Now you know how it is done, you can never moan again…right?
http://youtu.be/oSd0keSj2W8

WHERE DOES OUR NEWS COME FROM? (Scott)

Much has been made recently about Twitter’s ongoing evolution into a news platform. The social network recently ran ads on US TV with the sign off line, “Where off the record is on the record”. It’s also luanched “curated hashtag pages” with clear editorial input and control. This morning Radio Five interuptted its news bulletin to report that comedian Jimmy Carr had just Tweeted an apology for his tax avoidance shenanigans. And when I sat down in the office and fired up Twitter, the first thing I saw was a ‘promoted tweet’ (basically and ad) from British Airways, linking to this video they’ve produced to promote the airline’s involvement in the 2012 Olympics.
http://youtu.be/M6VzhDE1Wso ​