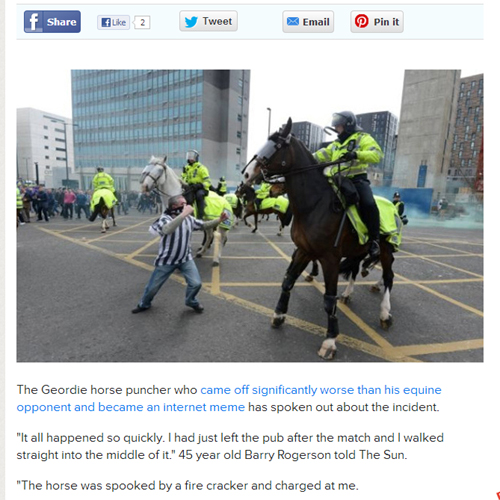 Got some exciting news you just can’t hold in – send it our way on either Twitter, Facebook, Linkedin or Google +

Some of you may have seen the shocking images of a man punching a horse after his team lost a football match in Newcastle. This man has now apologised saying he loves animals, owning three dogs and a fish pond himself, claiming he ahs no idea what came over him. At least some perpetrators of contemporary violence can hold their hands up and admit when they’ve made a mistake.
http://www.buzzfeed.com/samjparker/geordie-horse-puncher-apologises

Rumours have been circulating the internet for a while now (in fact probably since the series ended in 2004) that our favourite sitcom, Friends will be making a comeback. US website, Star Media, highlighted the rumours stating that NBC network confirmed they are planning to launch a new ‘comeback reunion’ season of Friends in 2014. Other sources are claiming this as nonsensical rubbish, but NBC bosses haven’t actually denied the report. I’m not sure what to believe, although it will be 10 years since the series ended so it would be the perfect opportunity for a reunion. Guess we’ll have to hold tight for an official announcement, if it ever comes!
http://dailycaller.com/2013/04/16/sorry-but-nbc-isnt-bringing-back-friends/

Move over Angry birds, Badland is in the house! Released last Thursday the new iOS game by Frogmind has all the characters of a breakthrough indie hit! Based around one simple mechanic it has its own impressive and unique visual style, The game, which asks you to help a race of flying, coal-black fuzzbubbles escape from the chains, pulleys, spikes, and cogs encroaching on their forest paradise, pulls the player in with its incredible look, silhouettes layered on top of storybook backgrounds… So if you’re bored for 30 seconds or 30 minutes Badland is what will keep your mind busy!
Last year Rovio which made Angry birds made an amazing $200 million. Can the new iOS game “Badland” beat the new target!? Only one way to find out! Start downloading and start playing!
http://www.buzzfeed.com/josephbernstein/is-this-game-the-next-angry-birds

BRADFORD BATMAN ON THE OTHER SIDE OF CRIME (Rebecca)

A man in Bradford has been charged with burgling a garage of power tools worth up to £770. Stan Worby had brought a suspect into the police station in Bradford although in an unexpected twist he carried out the burglary with the same man who he brought into the police station. The pair is due to appear in front of the Bradford Magistrates Court on April 26 and is pleading not guilty to burglary.
http://www.telegraph.co.uk/news/uknews/crime/9998022/Bradford-Batman-charged-with-burgling-garage.html

THE OSBOURNES TO SPLIT?! (Jadine)

It is said that the crazy, entertaining, dog loving Osbournes may be splitting! Rumours that the couple are leading “Separate” lives and photos have snapped with Sharon without her ring. Turns out the Black Sabbath singer and X X Factor judge have been dealing with slight money issues which has lead them to rejoining the working world once again, were Ozzy will be heading to Australia to tour with Black Sabbath and Sharon to poised to rejoin The X Factor. Seems that their busy lifestyles and finances are getting in the way of their crazy love lifestyle!
http://www.huffingtonpost.co.uk/2013/04/15/sharon-ozzy-osbourne-split_n_3084678.html?ir=UK+Entertainment