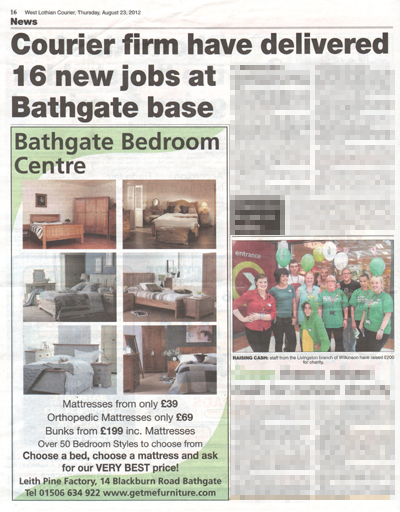 Scotland’s largest independent courier company has delivered great news to the people of Bathgate by creating sixteen new jobs at its headquarters.

Eagle Couriers which has been in business since 1985 has employed additional staff weeks after announcing it had reached its £3million pounds annual turnover target and smashed sales for the current financial year.

As well as positions in the office, Eagle Couriers took on staff for its courier fleet and hopes that this expansion in staff will aid a range of new client contracts.

Fiona Deas, Director at Eagle Couriers, said: “Eagle Couriers have had a fantastic year so far with record targets and a flock of client wins, all of which have put us in the position to give back to the local community and offer a range of job positions across our offices in West Lothian, Edinburgh and Bathgate.

“Added to our current team of 110 are twelve drivers and two office staff in administrative roles.

“These positions became available as a result of the company winning a contract with UPS parts flow division.

“Continuous recruitment is a key sign that the business is going in the right direction and, with plans to increase public sector customer base and reach our target of £5million by 2014, I’m confident more opportunities will arise with Eagle Couriers in the near future.”

This coverage appeared in the West Lothian Courier and was secured as part of a sustained PR campaign carried out by Holyrood PR on behalf of Eagle Couriers.