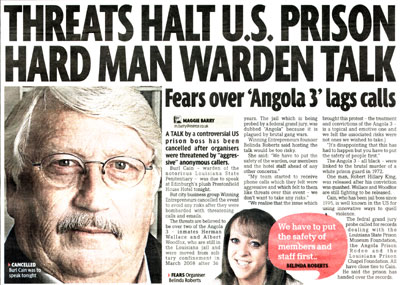 A talk by the boss of a notorious American prison had to be cancelled, after the Scottish networking group oragnising the event received a string of menacing phone calls.

The Daily Mirror newspaper reported how the leadership master class by Warden Burl Cain of Louisiana State Penitentiary, was cancelled at short notice.

A group of Scottish business leaders, who are part of the Winning Entrepreneurs elite networking group, were due to hear a motivational talk by Warden Cain during a trip to Edinburgh.

However the event, scheduled for the Prestonfield House Hotel, was called off after a flurry of protest calls were made to Winning Entrepreneurs.

Belinda Roberts, who runs the group, said the calls were aggressive in tone and to avoid any possible risk to group members or Prestonfield staff, a decision was taken to cancel the event.

Winning Entrepreneurs is an invitation only group, to offer networking opportunities to the founders and owners of fast-growing businesses. Expert media advice for the group is provided by Edinburgh’s Holyrood Partnershp, PR in Scotland.