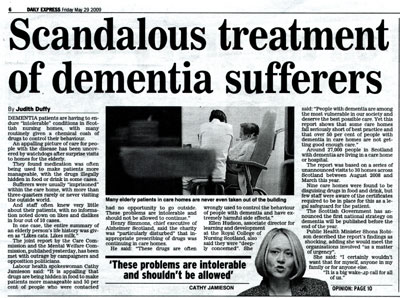 A report by the Daily Express has focused on claims that older people with dementia are being “scandalously” treated in some of Scotland’s care homes.

The article in the middle market newspaper highlighted the main points of a newly-published expert report, Remember, I’m Still Me, which was published jointly by the Care Commission and the Mental Welfare Commission following inspections at 30 Scottish care homes for older people.

Both organisations expressed serious concerns about the extent of drugs being administered to dementia patients, often hidden in food or drink. Experts also said care homes would have to work much harder to improve care.

The Daily Express article was among the significant coverage generated after Holyrood PR PR in Edinburgh handled the public relations campaign in Scotland.