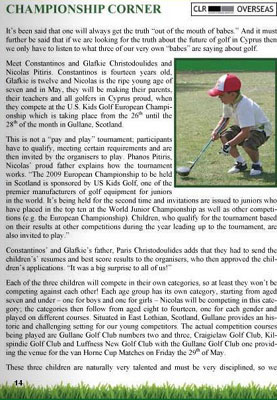 Three young Cypriot golfers have received a boost after some positive media coverage in the Cyprus Golf Federation’s newsletter ahead of their trip to play in the 2009 U.S. Kids Golf European Championships in Scotland.

Brother and sister golfers Constantinos and Glafkie Christodoulides, aged 14 and 12 respectively, will play in the championships as well as seven-year-old Nicolas Pitiris. The trio will represent the island against more than 400 other young golfers from 38 countries worldwide during the championships, which will be played in East Lothian over five of Scotland’s most historic links courses.

The four-page feature also tells how the young golfers will also be hoping to do enough to qualify for the U.S. Kids Golf World Championships at Pinehurst, North Carolina in August, with the top five players in each age and gender category earning a place.

The newsletter can be read by clicking here or visiting http://www.newsletter.cgf.org.cy/. The article is on pages 14-18.