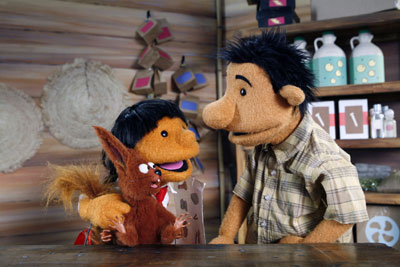 A CYCLONE survival film featuring puppets made by the team behind the original Muppet Show is to debut during this month’s United Nations Climate Change Conference.

UK charity No Strings is to screen its Cyclone/Typhoon film for the first time at a key side event to the main UN environmental conference being held in Copenhagen from December 7 -18.

The new film was created with the help of No Strings co-founders Kathy Mullen and Michael Frith – the people behind some of the world’s most famous puppets like Animal, Gonzo and Fozzie Bear – and is the fifth in a series of natural disasters films that includes Earthquake, Tsunami and Flood.

Rosie Waller, No Strings programme development coordinator, has been invited to tell aid workers from around the globe about the charity during the International Institute for the Environment and Development (IIED) Development and Climate Days Film Festival at the Koncerthuse on Monday, December 14.

The IIED event runs alongside the UN COP summit every yea,r and attracts hundreds of senior attendees from international aid bodies and NGOs to watch films showing how communities are affected by climate change patterns around the world.

Rosie said: “Screening the new Cyclone film at a high-profile climate change event is a great opportunity to show international NGOs exactly what No Strings educational films can do.

“We would love to do more to work with environment-related issues, but this main purpose of this series is to help at-risk communities deal with the daily threat and know what to do in a crisis.

“Just like the TV puppet shows we grew up with, these films are immediately engaging, and as soon as children see them their barriers drop, they concentrate hard, they laugh and enjoy themselves, but crucially, they are ready to take on board these vital lessons to stay safe and unharmed.”

No Strings has worked with organisations like Trocaire, Plan, Cafod, Save the Children, Unicef and many leading local organisations, and has taught children lessons like how to get away from the shore if they see the tide receding ahead of a tsunami in countries like Indonesia, East Timor and the Philippines.

The five disaster risk reduction films are being used in various South East Asian countries and are to be screened at every school in the Philippines to help educate the country’s children as part of the national curriculum.

Latest production, Cyclone/Typhoon, advises on communities in regions threatened by tropical storms where to access early warning radio broadcasts, how they should prepare to keep families and property safe, and what to do during a storm.

The 12-minute long film is being translated into local languages to put it to use in high risk areas such as the Philippines, as well as Burma and also Bangladesh.

Rosie added: “There is evidence that cyclones and typhoons are hitting South East Asia harder and more frequently. The tropical storm season is starting earlier than it used in to, and recent disasters in the Philippines and last year’s Cyclone Nargis, which affected around two million people in Burma, show how important preparing for these phenomena is.”

The COP-15 climate change conference is being hailed by the UN as a turning point in the fight to prevent climate disaster. The IIED Development and Climate Days Event gives global NGOs and international bodies a platform to discuss climate action strategies alongside the UN meetings of world leaders in the Danish capital.

No Strings was founded in 2003 by international aid worker Johnie McGlade, with the mission of delivering life-saving messages to children in the developing world.

Along with this and a peace-building programme for South East Asia, the charity also works in sub-Saharan Africa, where it has created a series of HIV-related films to support the work of local organisations in eight countries there, and has an ongoing landmine-awareness programme in Afghanistan.

Each No Strings film is highly reflective of the region it is aimed for, and is recorded in New York’s Jim Henson studios by a team of leading professional puppeteers before being dubbed into local languages in country.