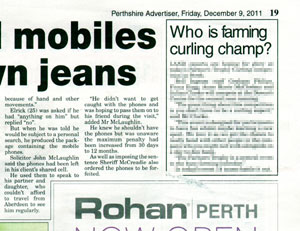 Bell Ingram shoot and score with coverage in local press

One of Scotland’s leading land management companies have entered a team into the annual Farmers Trophy Curling Competiton.

This is the second time Bell Ingram has entered a team into the curling competiton which is being held at the Dewars Centre.

The Bell Ingram team has been aptly named ‘Cool Runnings’ for the competiton.

Julian Clarke, one of the team members said “This event is designed for participants to have fun whilst maybe learning a new sport. The Farmers Trophy is a central event to the busy farming calendar.”

This coverage was secured with the Perthshire Advertiser as part of a sustained PR campaign carried out by Holyrood PR on behalf of Bell Ingram.