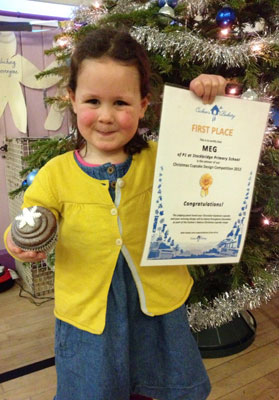 A StockBridge Primary School pupil was showered with 15 minutes of stardom after winning an exclusive cupcake competition for Cuckoo’s Bakery and featuring in the Edinburgh Evening News.

Meg Marshall created a Christmas cupcake for the cupcake shop’s Christmas selection as part of a competition launched by the owners among the children at the school.

Her creation, Chocolate Explosion, was brought to life by the baking team at Cuckoo’s Bakery who gathered their ingredients to create the cake which consisted of Belgian chocolate chip sponge, filled with white chocolate ganache, topped with a glittering chocolate buttercream and an edible snowflake.

Faye Calder-Kelly, Head Teacher at Stockbridge Primary, said: “I am very pleased to have worked in partnership with a local business ‘Cuckoo’s Bakery’ on this project.

“The children were very motivated by the cupcake competition.  They produced some very creative designs and original flavours.  We look forward to tasting the winning design.”

The full coverage featured in the Edinburgh Evening News and was secured on behalf of Cuckoo’s Bakery thanks to a PR Scotland campaign with Holyrood PR.