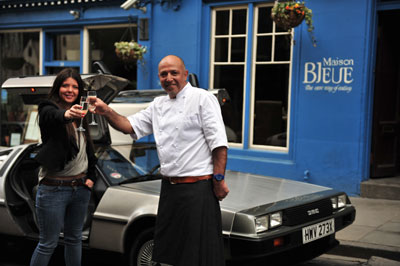 Maison Bleue’s trip back to the past to offer lunch time meals for only a fiver catches the headlines on Deadline News.

The Edinburgh’s Old Town restaurant is marking its anniversary by launching this irresistible offer price last seen when the restaurant first opened its doors in August 1998. Proving a major success story, Maison Bleue blends French, Scottish and North African cuisine on its menu – with venison and Haggis Balls among the most popular dishes.

The owner, Dean Gasabi said: “It’s certainly been a rollercoaster 15 years and few of the restaurants which opened around the same time as Maison Bleue are still around today. So we are delighted to be reaching this anniversary.

“We’ve gone from strength to strength in that time and we wanted to say a big thank-you to all those loyal customers who have helped Maison Bleue to become something of an Edinburgh institution. So our lunch for £5 deal is perfect. It lets us look back fondly at where we’ve come from while also looking forward – very much a case of back to the future.”

Dean’s daughter Layla, 32, now takes a key role running the distinctive blue frontage restaurant on historic Victoria Street. To mark the launch of the £5 offer, which will last until the 1st of August, the pair posed with a vintage DeLorean car which transported Mart McFly through time in the Back to the Future movies.

As the ongoing credit crunch continues to bite, diners at Maison Bleue may well be wishing they could turn the clock back on other prices too.

When Maison Bleue first opened its doors at 1998, Tony Blair was in his first year as Prime Minister and Google was founded in California’s Silicon Valley.
At that time, a pint of beer cost an average of just £1.20 (now £3.80) while a cinema ticket would set you back £3.30 (now £8.80).

The full coverage can be read on Deadline News and was secured on behalf of Maison Bleue as part of a public relations campaign carried out by Holyrood PR.