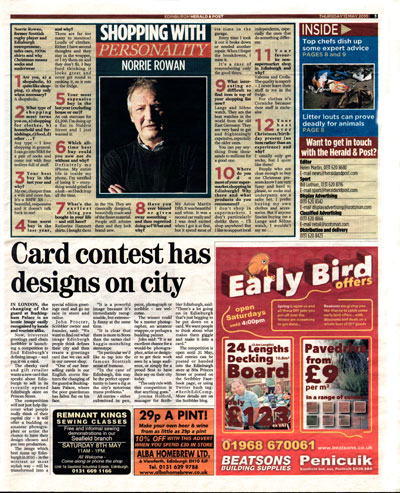 Since opening its newest store on Princes Street Edinburgh, Scribbler have been eager to impact further on the city by introducing a humorous card that showcases the capital in a witty and stylish way using imagery unique to the city.

The card competition came about through Scribbler already offering an iconic London image on a card sold throughout their stores in England – the card depicts the changing of the guards at Buckingham Palace.

The card portrays the time-honoured image of the guards standing to attention, the fun is poked at the image as one of the guards has fallen and landed facedown.

This simple yet effective image has sold well, and Scribbler want to create the same statement and humour in Scotland.

John Proctor the owner and founder of Scribbler said: “We want to find out what image Edinburgh people think defines their city and then create a greeting card we can sell in our newest shop.”

Proctor understands that both Scotland and its capital has more to offer and said: “It is clear that there is more to the Scots than the tartan-clad haggis munching stereotype. In particular we’d like to tape that famous Scottish sense of humour.”

The competition provides the perfect opportunity for any budding artist; photographer or scribbler to create an image they feel defines Edinburgh.

Jemma Holford Scribbler’s Edinburgh store manager has been enthusiastic about the competition stating: “There’s a lot going on in Edinburgh that’s just begging to be put down on card. We want people to think about what makes them giggle and make it into a card.”

The Scribbler competition will run until the 30th June 2010 – entries can be posted or dropped in person to the Scribbler store at 80a Princes Street or you can enter online by posting them on the Scribbler Facebook page, or using Twitter hash tag #scribEdiComp.

The article was secured as part of an on going social networking and public relations campaign created for Scribbler by the Holyrood PR.