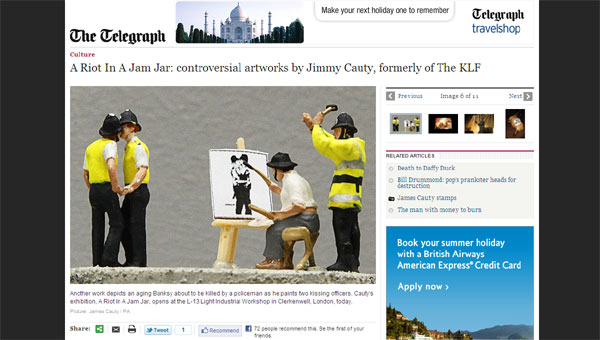 Like our links? Why not tell us via our facebook and twitter pages and please suggest any links you think we may like – we are always open to suggestions! In the mean time hope you enjoy our cream of the crop links from today…

With news out today that 250,000 people world wide missed out on tickets for the 2012 Olympic Games, these pictures might be something to cheer them up. It’s photographs that capture sport stars at the perfect moment – funny faces and all.

A RIOT IN A JAM JAR (Laura)

Former musician with band KLF Jimmy Cauty has launched an art exhibition in London today which depicts a series of real and imaginary violent clashes between well known figures and the authorities – all of which are contained in a jam jar. Titled Riot in a Jam Jar, the exhibition depicts miniature scenes such as Charles and Camilla involved in a riot during a student fees protest, violence during the G20 summit in London 2008 and Take That being assaulted by the police. Cauty says that each piece acts represents a contained riot which is presented in manageable doses, rather like a news story. His work encapsulates the media’s fixation with portraying the sensational i.e. violence and that these tiny acts of violence serve as snap shots of a greater and more complex reality. Some of the scenes are very surreal but do encapsulate the sensationalism of the media and provides an interesting take on how the media allows us to witness parts and not always the whole of the reality.

NOTHING TO HIDE = NOTHING TO FEAR. WHO IS REALLY HARMING YOUR PRIVACY (Scott)

Enough of the amusing fluff and nonsense – here’s a weighty and serious read. Super injunctions have put ‘privacy’ issues front and centre in the public consciousness. This writer makes a powerful case for the ‘plurality of privacy’. Without even mentioning the controversy of legal injunctions or the data-mining fears raised by Google and Facebook,

NOT SO QUIET NEWS DAY (Laura)

Just in case you haven’t caught the Quiet News Day bug yet, here is a link to a weekly podcast hosted by our very own Scott Douglas and his partner in crime Peter Laing. Featuring a weekly mash up of the latest journalism, social media and public relations news. This week the duo are joined by young journalists Alan Roberston and Michael Donnelly and the foursome discuss how journalism has evolved and is continuing to evolve at the hands of social media – definitely worth a listen!

There’s always a movie that you wish you had gone to the cinema to see and you’ve never really got round to renting it either so now, You Tube steps in. A number of subscribers have created 5 second clips of movies that have hit Hollywood – from The Lord of the Rings to The Lion King – which pretty much sum up what happens in the movie without actually watching the whole thing. Take a look at the ones that you have seen to see if their adaptations are correct, or save yourself some money by watching a small clip of the ones you havn’t seen. Win Win! Actually, that’s not on there yet.