Couriers Get On Their Bikes 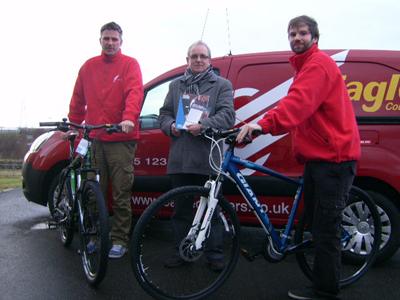 With 2013 hailed as the year for Scots to get on their bikes by the Government, an independent courier company is doing its bit to try and make it happen.

Eagle Couriers which is taking part in the Government’s Cyclescheme, has purchased new bikes for five of its employees, a move which they hope will be replicated across the business should the initial phase be successful.

The Cyclescheme which is a part of the Government’s green transport initiative enables employees to cycle to work on the best electric bikes, tax free, allowing them to save on average half the cost of purchasing a bike themselves.

“The scheme is great as it not only helps people to become more fit and active when going to and from work, but also means people can have a bike at nearly half the cost.

“Normally many people might not be in the position to pay for a bike for work, so the fact that people are able to rent it from their employer each month definitely makes it economical and makes it attractive to Eagle Couriers employees.”

Scottish Transport Minister Keith Brown recently used his New Year message to encourage more people to start cycling in Scotland. He also outlined plans for £53million worth of money to be set aside by the government to help improve cycle paths.

Jerry Stewart, director at Eagle Couriers said: “The Cyclescheme is something which caught our eye around six months ago and is something that we are extremely excited about.

“What made the scheme attractive to us as an organisation is the fact that we have been working hard to commit to green issues for the past few years which has also included us adding an electric bike to our fleet in 2012.

“We have had great feedback so far from our employees using the bikes and it seems that the rest of the team would also be keen to take part in the scheme should we decide to extend it across the business.”

Neil Porteous, operations control manager at Eagle Couriers, said: “The Cyclescheme has given me the opportunity to cut down my fuel bills and has also given me a way to keep fit and active.

“I’d recommended anyone who has the chance to take part in the scheme to do so as the benefits are endless.”

The firm which has bases in Edinburgh, Bathgate and Glasgow counts BT, BBC and Scotland Excel amongst some of its clients has plans to add a further 12 vehicles to its already strong fleet of 90 vehicles and has already added two staff to take its head count to 124.

Eagle Couriers has almost 30 years experience providing safe and quick logistics services to organisations across the private, public and third sectors, as well as working directly with consumers.

More information about Eagle Couriers can be found at www.eaglecouriers.co.uk

Comments Off on “There’s the bank balance”: How an employee-owned firm reassured its furloughed team

VW campervan converters slip back into gear, hopeful of a staycation boom

Comments Off on VW campervan converters slip back into gear, hopeful of a staycation boom

Comments Off on “There’s the bank balance”: How an employee-owned firm reassured its furloughed team

VW campervan converters slip back into gear, hopeful of a staycation boom

Comments Off on VW campervan converters slip back into gear, hopeful of a staycation boom