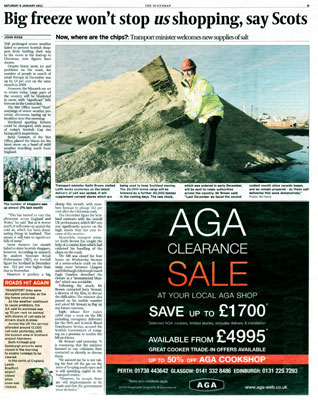 Scotland’s leading independent courier firm has celebrated another prominent piece of coverage in The Scotsman.

Eagle Couriers was featured in the broadsheet paper after its director Jerry Stewart received a call from Scotland’s transport minister Keith Brown about the recent weather chaos on the country’s roads.

Mr Stewart had criticised the Government about its lack of action and preparation for the recent icy blast, which had caused the M8 to be closed due to black ice. But after saying the decision to close the motorway was “unacceptable”, he received an unexpected call from the minister reassuring him that he was working flat out to ensure a similar scenario did not occur.

Mr Brown even passed on his mobile number to Eagle, encouraging them to flag up any future transport concerns.

The full coverage can be viewed on the Scotsman’s website and was the result of a PR in Scotland campaign carried out by Edinburgh public relations experts the Holyrood PR.