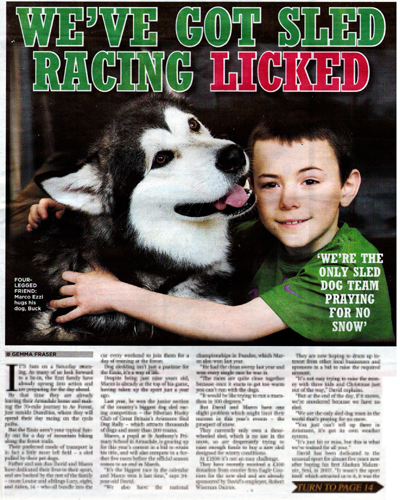 One of Scotland’s largest independent courier companies has been busy this festive period donating money to a local man and his son for a new sled.

Eagle Couriers gave much needed financial backing to David Ezzi and son Marco to help the pair to continue to compete in sled dog racing. The donation will help David and nine year old Marco to buy a new sled for the 2012 racing season.

Marco who has shown a real talent for the sport has previously been using a sled borrowed from a friend.

Jerry Stewart, Director at Eagle Couriers said “We firmly believe it is important for Eagle Couriers to be involved with the wider community, so we’re delighted to help David and his son Marco and we look forward to following their progress in the various competitions they’ll be entering.

David added “I am blown away by the support that we have received in the quest for our new sled. We are extremely to Jerry and the team at Eagle for their very generous donation.

This coverage was secured with the Edinburgh Evening News as part of a sustained public relations campaign carried out by Holyrood PR on behalf of Eagle Couriers.