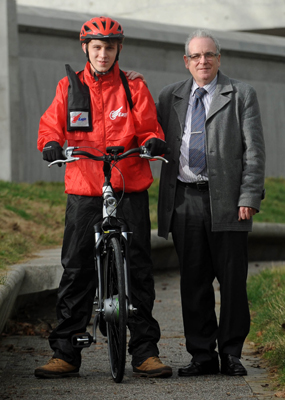 After being out of work for just under a year, a twenty year old man has landed an ‘electric’ role with Eagle Couriers, with the story appearing in The Edinburgh Evening News.

Paul Rice, from Edinburgh, was successful in applying through the government’s 18-24 Youth Wage Incentive scheme for a role of electric bike courier after Eagle Couriers added the vehicle to its fleet.

The firm which has bases in Edinburgh, Glasgow and Bathgate, bought the bike from The Edinburgh Cycle Company, one of the largest distributors of electric bikes in the UK in order to not only employ a young person out of work but to also help towards its environmental contribution.

This coverage was achieved in The Edinburgh Evening News on behalf of Eagle Couriers by Holyrood PR as part of a targeted PR campaign.