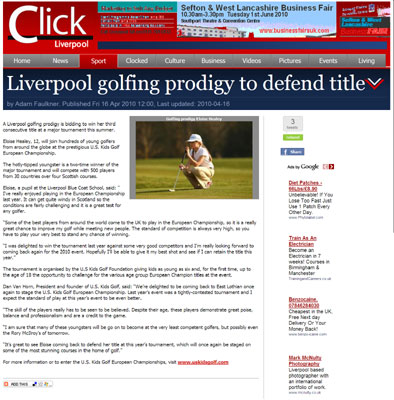 A young Liverpool golfer has been featured in an article in a local online publication, providing coverage for US Kids Golf.

Eloise Healey, is set to take part in this years, US Kids Golf European Championship – defending her title from last year.

The pupil from the Liverpool Blue Coat school, will take part in this competition this summer, travelling to the home of golf in Scotland to play over its four historic courses.

Organised by the US Kids Golf Foundation, over 500 players from 30 countries are expected to compete this year.  The event gives children from as young as six up to the age of eighteen the oppurtunity to challange for the various age group European Champion titles.

David van Horn, president of US Kids Golf says in the article: “We’re delighted to be coming back to East Lothian once again this year.  Last year’s event was a tightly contested tournament and I expect the standard of play at this years event to be even better.

“The skill of the players really has to be seen to be believed.  Despite their age these players demonstrate great poise, balance and proffessionalism and are a credit to the game.

“Its great  to see Eloise coming back to defend her title at this year’s tournament.”

Eloise herself adds: “I was delighted to win the tournament last year against some very good competitors, and I’m really looking forward to coming back again for the 2010 event. Hopefully I’ll be able to give it my best shot and see if I can retain my title again this year.”

The full article can be read on the Click Liverpool website and was secured as part of a successful PR and social media campaign carried out by the Holyrood PR.