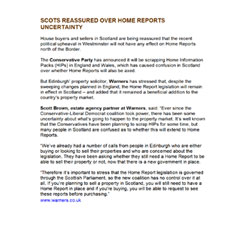 Leading Edinburgh property solicitors Warners have spoken out in reassuring Scottish residents concerning the laws being introduced by the new coalition government will not affect them as home owners.

The article was featured in ‘Construction Now!’ an online website which is fast becoming the leading construction media portal for the industry – distributing eight regional newsletters a day.

When the Conservative-Liberal Democrats government formed – their key strategies followed with further modifications to the UK property market – the scrapping of the Home information Pack (HIPs) occurring within England and Wales, many Scottish residents have been uncertain if the same changes will affect them.

Scott Brown, estate agent partner at Warners went onto reassure Scottish home owners by saying: “it’s important to stress that the Home Report legislation is governed through the Scottish Parliament, so the new coalition has no control over it at all.”

The article was secured by a well targeted public relations campaign carried out by the Holyrood PR.