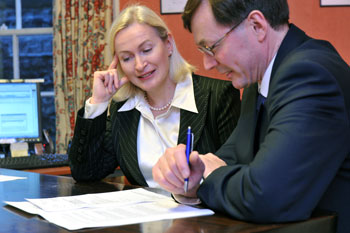 Thousands of couples living together in Scotland are unaware of the rights they have to claim against their partner in the event of a relationship break-up.

According to Edinburgh legal firm Gibson Kerr, many co-habiting couples across the country remain ignorant of the fact that they are entitled to claim against their partner if they split up – as they believe that only married couples are able to make such a claim.

The firm highlights that the law was altered in 2006 when The Family Law (Scotland) Act came into force, which made a number of significant changes in the law relating to divorce, separation and family life in general.

Among these is the ability for co-habitees to make a claim against their partner within a year of splitting up if they feel that they have been financially disadvantaged as a result of their relationship.

The new law also enables a co-habitee to claim for a share of their partner’s estate in the event of their death – although any such claim needs to be made within 6 months.

Fiona Rasmusen, partner at Gibson Kerr, said: “Even though it has been the law for three years, there is still an incredible amount of misunderstanding around what people who cohabit are legally entitled to, compared to those who are either married or in a civil partnership.

“Until 2006, co-habitees did not have much in the way of legal rights when it came to making a claim against their partner. If you split up, you had to settle things amicably between yourselves but you weren’t able to take your ex-partner to court.

“Where a cohabiting couple (same sex or opposite sex) separate, then there is now a presumption that any household goods they acquired during their relationship (with some exceptions) will belong to them equally.

“The law also now states that where any money is saved from housekeeping, or if property is bought from housekeeping money (regardless of who provided the money) cohabitants have equal right to share in that money or what has been purchased with it (apart from the home they live in).

“If a couple split up, therefore, either one can apply to the court for up to a year afterwards for an order to pay a sum of money by way of compensation for the cohabitant who considers they have lost out financially.

PR in Scotland for Gibson Kerr

“The court would look at all the circumstances including whether the person applying to the court has suffered economic disadvantage (usually loss of earning capacity, capital etc) and whether the other party has benefited from the other’s contributions – e.g. looking after the couple’s children.”

Fiona also says that co-habitees should remember that they can also make a claim in the event of their partner’s death -if their co-habiting partner did not made a Will.

She added: “If one member of a cohabiting couple dies, their partner is entitled to make a claim but they must do so within six months from the date of death.

“In these cases, if there is no valid Will, the surviving cohabitant can make an application to the court for a capital sum from the deceased’s estate. The court will take a number of matters into consideration including the size of the deceased’s estate and any other claims against the estate by other parties such as their relatives or children, before deciding on how much to award the co-habiting partner.

“Of course, it is much simpler and less problematic if you do make a Will, as this would take precedence over the Act and save a lot of heartache. Dealing with the death of a partner is a highly stressful and traumatic time, and many people will not want the extra burden of having to think about making a claim in court within six months.

“However, it is still important for co-habiting couples to remember to make sure they know what legal rights they have when it comes to making a claim. If anyone has any doubt about their standing in a relationship they should contact a family law solicitor for advice.”

More information can be found on the Gibson Kerr website – www.gibsonkerr.co.uk.

Gibson Kerr is a family-run law firm that has been established in Edinburgh for more than 100 years. It has an excellent reputation for providing a comprehensive service encompassing both property and personal law, including powers of attorney, executries and wills.