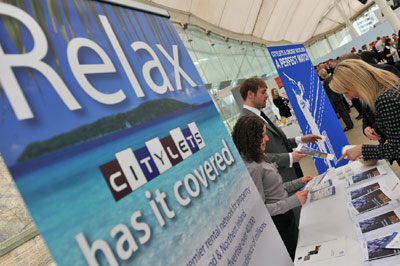 More than 300 movers and shakers in the property rental sector turned out at Scotland’s biggest annual landlord event yesterday (tue).

Now a key sponsor of National Landlord Day has predicted the event will go from strength to strength as private landlords take on increasing political significance.

Thomas Ashdown is managing director of Citylets, Scotland’s biggest and most influential property letting portal and primary sponsor of the event organised by the Scottish Association of Landlords (SAL).

Speaking about the record 300 delegate turn out, Thomas said that success coincided with an extremely positive Government review of private rented housing.

He added: “There is no doubt National Landlord Day is and will continue to be an important annual fixture in the property calendar.

“It’s telling that on the day of the event the Scottish Government has published its review of private rented housing and acknowledged that private landlords are playing an ever more important role in the housing market.

“I believe what we are witnessing is a sea change in attitudes towards the private sector. There has often been a misconception that it’s about little more than wealth creation – in fact it has a very serious role to play in Scottish housing.

“I’m delighted that Citylets is sponsoring the event, which has been a tremendous success and we’re already looking forward to next year.”

Among the guest speakers at Edinburgh’s Dynamic Earth was Housing Minister Alex Neil, who earlier unveiled key findings of the most extensive study of the sector ever undertaken in Scotland.

It found high levels of satisfaction among landlords and private tenants, while also recording a marked increase in demand for private lets among students, young professional and migrant workers.

Alex Neil said: “The current economic downturn shows demand for private housing increasing at a significant rate. It is imperative we develop a modern and effective private rented sector.”

He added: “The findings are encouraging, but we recognise there is still work to be done. Private landlords have the potential to play a greater role in providing accommodation for homeless households in particular.”

Citylets was launched in 1999 and is Scotland’s most successful lettings portal. Its quarterly Rental Market Report is the country’s only detailed and independent barometer of the rental market, based on 40,000 annual lettings from over 250 agents. It is now a respected tool among investors, landlords and letting agencies.

The next report will be published in April and Thomas added: “I have no intention of prejudging those findings but what I can say at the moment is that supply and demand for rental property is very healthy.”

Citylets staff who were on hand to meet delegates at the event and answer questions about the quarterly reports included Client Services Manager Mark Crossey, Kasia Drak who provides customer support and Dr Colin Roberts of Edinburgh University who helps assess the data.

Previous quarterly reports can be found at www.citylets.co.uk