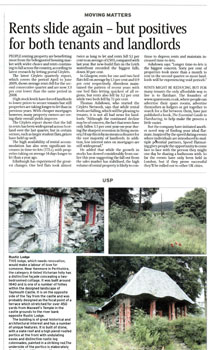 Citylets has been given another PR boost after The Scotsman featured the latest quarterly data report in its prestigious property pages.

The national newspaper ran a story about how the latest report showed that rents were continuing to fall across the country – creating a beneficial scenario for tenants in Scotland.

The quarterly report, which covers the period April to June 2009, showed that average rents declined for the second consecutive quarter and are now 3.3% lower than the same period in 2008. High stock levels have forced landlords to lower prices to secure leases yet properties are still being slower to let than in previous years.

With cheaper mortgages however, Citylets added that many property owners were actually seeing their overall yields improve and said that renting property was still a good investment.

The full coverage appeared in The Scotsman property supplement and was the result of a dedicated media strategy by Holyrood PR PR in Scotland.