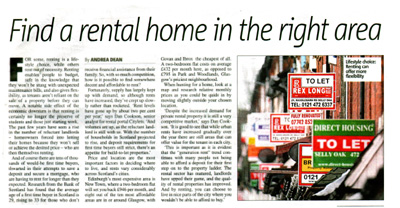 The UK’s leading rental portal has been giving key advice to individuals on the best ways to find a rental home in the right areas.

Citylets, the company behind the first in-depth quarterly rental report has revealed the most and least expensive areas to rent in Scotland.

Edinburgh’s most expensive are is the New Town where the average rent for a two bedroom flat is £946 per month whilst eight out of the ten most affordable areas appear in Glasgow with Govan and Ibrox being the cheapest with a two bedroom flat costing on average £432 per month.

Dan Cookson, Senior Analyst at Citylets said: “Rent levels have gone up by about two percent per year.

“And volumes are up, as the reluctant landlord is still with us. With the number of households in Scotland projected to rise, and deposit requirements for first time buyers still strict, there’s an appetite for build-to -let properties.Price and location are the most important factors in deciding where to live, and rents vary considerably across Scotland’s cities.

Dan continued: “Despite the increased demand for private rental property it is still a very competitive market. It is good to see that while urban rents have increased gradually over the year there are still areas that can offer value for the tenant in each city.

This coverage was secured with The Metro as part of a sustained PR campaign carried out by Holyrood PR on behalf of Citylets.