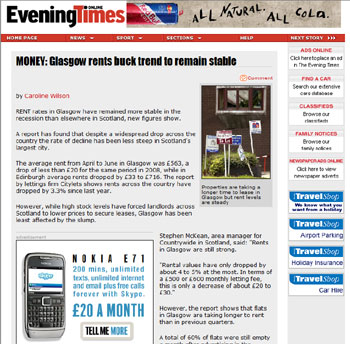 Citylets – Scotland’s leading lettings portal – has received another major piece of coverage thanks to the publication of its latest quarterly data report.

The firm was featured in the Glasgow Evening Times, which ran a story about how rents in the city were falling at a lower rate than elsewhere across the country.

The article featured statistics from the latest quarterly data report from Citylets – which is the most in-depth analysis published about Scotland’s rental sector. The report showed that rents were continuing to decline in Glasgow, Aberdeen and Edinburgh and flats were taking longer to rent than before – although Glasgow had been slightly less affected than the other big cities.

The full coverage appeared in the Evening Times and was the result of a proactive media campaign by Holyrood PR PR in Scotland.