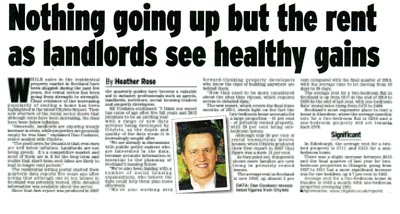 Excellent PR in Scotland for Citylets with National Coverage

Citylets, the residential lettings portal has reached a landmark in the publishing of the most in-depth report into the rental market across the country.

The report which has reached a five year milestone this year has shown the rental market is going from strength to strength.

Since the first report was produced in 2007 the quarterly guides have become an extremely valuable aid to industry professionals such as agents, landlords, investors, social housing leaders and property developers.

Dan Cookson, Senior Analyst with the Citylets group said “I think our report has come off age after five full years and 2012 promises to be an exciting year with a range of new data services being developed by Citylets, as the depth and quality of the data means it is increasingly sought after.

“We are already in discussions with public policy makers who are interested in the data, because accurate information is essential to the planning of Scotland’s housing future.

“We’ve also been liaising with a number of social housing organisations, who believe the data could help them plan more effectively.

“Now they need to be more considered about the sites they choose, which requires access to detailed data.”

This coverage was secured with the Daily Express as part of a sustained public relations campaign carried out by HolyroodPR on behalf of Citylets.