Citlyets Get Plaudits For Android App 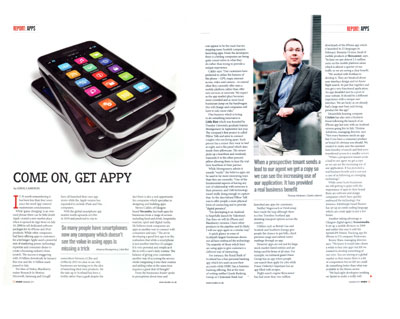 With the huge new app market opening up, worth an estimated £3billion in 2010 and predicted to reach a staggering £12-£18billion market by 2015, Citylets is at the forefront among Scottish companies taking advantage of this new method of customer interaction.

Steven Calder from Glasgow based Streamba  highlighted how Scottish companies tend not to take the risk of producing their own app, preferring to use the existing features of the phone such as GPS, internet, video and camera functions.  He expects that as the app market becomes more crowded Scottish businesses will jump on the bandwagon and companies will have to follow the example set by Citylets in taking risks to deliver a more accessible product.

Citylets have seen a business boost following the launch of their iPhone app last year, which achieved a 3-star rating on Apple’s App Store, and have produced a new Android app, which went live in July. Managing director Thomas Ashdown said in the article, “Not every business needs an app but if you have a consumer product or brand it’s obvious you should”.

In addition to this app publicity Citylets has also announced that its website maintained a constant top 100 ranking in the property sector for the past 18 months, according to online competitive intelligence agency Experian Hitwise

The full article appeared in the Business Insider on September 15th and this coverage was obtained through a media relations campaign orchestrated by the Holyrood PR on behalf of Citylets.