Chippy Proves That There Is Plenty More PR in The Sea 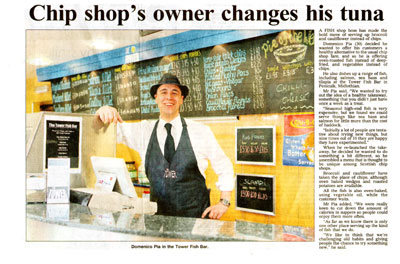 Local newspaper The Courier and Advertsier has featured an article on fish and chip shop owner who has taken the bold move of offering broccoli and cauliflower with his fish instead of the traditional chips.

The Tower in Penicuik, offers its customers a healthy alternative to the usual chip shop fare, offering oven roasted fish instead of deep fried and vegetables instead of chips.

Customers can choose from a range of fish including; seabass, haddock, salmon and tallapia.

Domenico Pia owner of The Tower says in the article: “We wanted to try out the idea of a healthy takeaway, something that you didn’t just have once a week as a treat.

“Seasonal hiogh end fish is very expensive, but we found that we could serve seabass and salmon for little more than the price of haddock.

“Initially a lot of people are tentaive about trying new things but nine times out of ten they are happy that they have experimented.”

The menu at The Tower is thought to be unique amongst Scottish chip shops and is the only chippy in Scotland to offer healthy alternatives.

The article was secured as part of a PR campaign carried out by oublic relations agency the Holyrood PR.