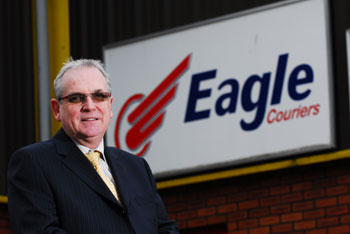 Staff at Scotland’s leading independent courier firm have been celebrating after they received an unexpected piece of TV advertising.

Eagle Couriers received a piece of prime time exposure on BBC1 after one of their motorbike drivers was featured during a repeat of the hit comedy Chewin’ the Fat.

The firm provided specialist courier clothing and a branded motorbike for a scene in the famous show when the series was originally filmed in 2001. But staff were left surprised when the scene was repeated as part of a “best of” programme – showcasing their courier driver to a new audience of millions.

One of the firm’s directors Jerry Stewart explained: “We provided the courier gear and a bike to the Comedy unit a few years ago and it was used in an episode of the programme. It was a great piece of publicity for us, as it clearly showed our branding and company name to a prime time audience.

“We didn’t expect to see it again, as the show doesn’t get repeated often, so we were surprised to see it appear again in the “best of” show. We didn’t think it would have been counted as one of the best-remembered sketches, so it was a nice discovery.

“Hopefully we may have caught the eye of a few people in the new audience of viewers who saw the programme.”

The story was highlighted by Holyrood PR, which provides PR in Scotland for Eagle Couriers.