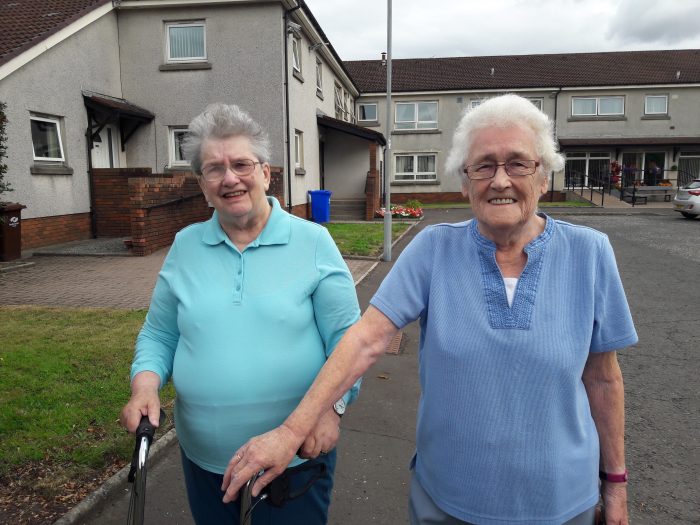 TWO friends from Renfrewshire are proving that very little can stop them getting out and living life to the full – as long as they have each other.

Rena Dalziel, 83, and Nessie Shields, 85, residents at Paisley’s Springbank Road Sheltered Housing complex, have a busy social calendar including everything from singing in a choir to helping primary schoolchildren learn to knit.

Over the years, the pair have found they work well together, acting as each other’s eyes and ears as Rena has limited vision and Nessie is hard of hearing.

Now, the friends are part of a new walking group supported by Scotland’s walking charity Paths for All, something Rena admits she wouldn’t have had the confidence to do on her own.

And to celebrate National Friendship Day on July 30, Rena and Nessie have been talking about the benefits of being active.

Nessie said: “We do anything that’s going on. We do keep fit, arts and crafts, coffee mornings, we sing in the complex’s choir, and we go on days out and outings. Anything that’s organised, we do.

“We’ve been with the walking group for five weeks and really enjoy it.

“Rena’s got a walking frame and she pushes it and I hold it and guide it in the direction we’re supposed to be going.

“For me, it’s great having Rena. When we’re at meetings for all the groups we go to, I don’t hear what they are saying, and Rena tells me what’s going on. If it wasn’t for that I think I’d be pretty lost.”

Nessie and Rena first met around seven years ago at the Beechwood Centre when they did a computer course. Two years later, they picked up their friendship when Rena moved into Springbank Road where Nessie already lived.

The duo recently signed up to the Paisley Puffins, a weekly walking group especially for sheltered housing residents in Renfrewshire.

Run by Renfrewshire Council, the Paisley Puffins started after securing financial support and walk leader training from Paths for All, Scotland’s walking charity.

Nessie said: “The walking group is very good. We get to get out and about and go to Robertson Park and see the baby ducks and the flowers and the children playing.

“It gives you fresh air and exercise, but they usually pick parks that have a lot of seats. It’s better and nicer to be out walking rather than just sitting in the house. When you go out, you meet new people.”

Rena added: “We have three groups – the fast, the medium and the slow group. I’m in the slow group but I know I don’t have to rush and that’s nice.”

There are over 550 health walks running across Scotland every week. For more information, visit www.pathsforall.org.uk.

WANT TO FIND OUT HOW WE CAN HELP YOU GET CHARITY PR SUCCESS?