Celebrity Tweeting in the Digital Age 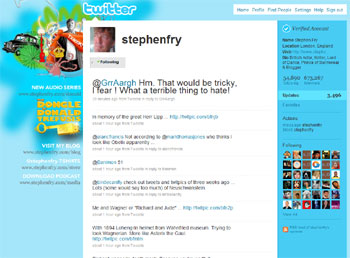 I’ve got to confess that I don’t really understand Twitter. I mean, I understand what it is and how it works – I’m just not convinced that there’s a good reason for it existing.

I have difficulty articulating a well thought-out argument or status update on my other social networking sites at the best of times. So the thought of limiting my musings to just 140 characters is still an alien concept to me.

Nevertheless I’ve set up my own personal Twitter account and have ploughed into this brave new world of tweeting. Of course, we’ve all been busy recently with our Holyrood PR twitter account which is providing constant updates about our clients – but using it for personal tweets is taking some getting used to. Particularly as I want to steer clear of the whole “had a sausage for breakfast”, “getting on a bus” or “waiting for the rain to stop” banality that seems to take up most of this new social networking site.

What I do find interesting about Twitter however, is the abundance of celebrities that use its technology. In the past, the only web presence you’d get from actors, musicians or sports people would only include an occasionally updated list of their upcoming concerts or next film – but these days, on the other hand, we get exclusive behind-the-scenes glimpses of the next mega-budget blockbuster or footage of a work in progress in a recording studio. And, if you follow Ashton Kutcher, you get to see candid pictures of Demi Moore in her pants.

OK, some of the information that is published by some of these celeb twitterers is still fairly boring, but I still like the fact that people such as Stephen Fry are scribbling down random musings and posting them up for their legions of followers. I’m even following the keyboard player from The Levellers, who has been putting up candid photos of the band’s debauched behaviour on their recent European tour…

So, now I’m a fully signed up member of the tweeting brigade, I need to find some equally interesting things to post to my small group of followers.  But first things first, as lunch time beckons. I wonder if they’d be interested in hearing about the delights of the Greggs Mexican chicken lattice?