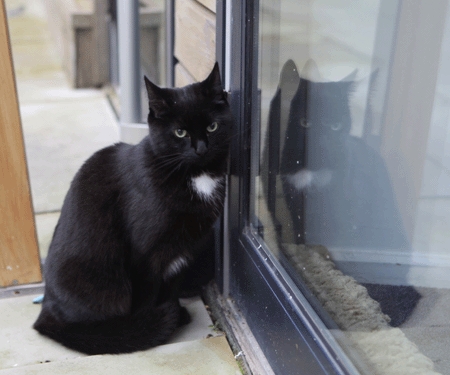 It is a well known myth that cat’s have nine lives, and if this is the case then a certain furry feline, found by the Holyrood team this morning, has certainly used up one of hers!

The whole debacle started when Sarah heard a quiet meowing as she sat at her desk first thing this morning. The office windows are floor to ceiling and she quickly spotted the little black and white creature, paws up against the pain, begging to be let in.

Given the PR team’s kind hearted nature, and general curiosity, she was encouraged to go out and investigate. No sooner was the office door open than in the little fur ball dashed, making a beeline for the least cat friendly person in the office – Raymond!

Once comfortably installed under the desk of both Directors, there was little moving it, and so we let it be, some of us secretly hoping we would get to keep it as an office mascot! We decided on the fitting title of Sooty.

However a Holyrood PR petting corner was not to be, as Lesley from Deadline revealed she had a serious fear of cats. And so ensued a rather hilarious episode of ‘human and cat’ which concluded with Linsay and Roddy, armed with 3 golf umbrellas and a rucksack between them, herding it out into the enclosed courtyard!

Quick thinking on the part of Lewis, our resident videographer, led the whole team to send out tweets and Facebook updates asking if anyone living in the area had lost a cat. Pictures were posted and so many people re-tweeted and shared, helping us widen our search for the owner.

By 2 o’clock there was still no sign of the owner, and no response via social media – more than one of us were beginning to lose faith. Our office manager was even on the phone to SPCA asking for advice information on microchipping!

But, like with every good story, there is happy ending! Not long after we had nearly given up hope, Aimee spotted a very distressed lady searching the bushes outside in the courtyard. Rushing out we explained what had happened and the very relieved woman was reunited with her furry companion.

Apparently the little thing, a girl named Pumpkin, had only recently moved to the area and had fallen two storeys from a balcony! So, they may have nine lives, but it seems some cat’s just don’t have the head for heights!