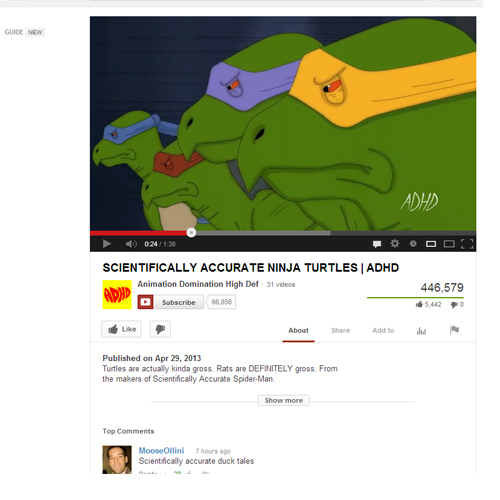 Got any thrilling stories of your own? Give us a shout on our Facebook and Twitter pages.

We all used to love the hit TV show, Teenage Mutant Ninja Turtles, when we were younger. The delightful team of Michelangelo, Leonardo, Donatello and Raphael, used to keep me amused for hours on end. However, as much as it was just a cartoon, and like many cartoons, the actions and realism of what they could do was always far-fetched. Now, a team of party-poopers have come together to create this short video of what the turtles would have been like according to scientific accuracy. Has this ruined the show for you now?
http://youtu.be/aqW5upASa-8

If you haven’t watched Breaking Bad, you will have undoubtedly heard someone raving about it. Usually I am one of those people who find it to be one of the greatest TV shows ever, but that’s another story. If this game really existed, I would be out there buying it, alas, it is just a parody that someone has made up. The characters looks as life-like in Lego as they do in real life, with live sound clips taken from the show replicating scenes from the hit show. This video will become a viral hit but just now it’s on 137,000 views in just 3 days.
<a href=” http://youtu.be/fSUK4WgQ3vk ” target=”_blank”>http://youtu.be/fSUK4WgQ3vk

HOW FAR WOULD YOU GO FOR YOUR WORK? (Melissa)

A New York property agency is giving committed employees a 15% wage increase if they go the extra length and show their dedication to the company- by getting the firm’s logo tattooed onto them. Rapid Realty staff are being offered this quick trip up the pay grade ladder by getting the painful inkings done anywhere on their body. It is believed that 40 staff have already taken up manager’s offer and now are left with the green and black logo on them. Not sure if these employees are committed more to either money or their jobs. Would you go that far for a pay rise?
http://metro.co.uk/2013/05/01/boss-offers-employees-pay-rise-for-getting-tattoo-of-company-logo-3708928/

A story from our childhood stories is breaking the news. Corey Donaldson, from the US, took £90,000 from a lender to bail out people on the streets. After losing his home last year, he has experienced the situation of being homeless and as a real hero he came up with the idea that since the banks had been bailed out, and the people had not, he was going to confiscate the money and redistribute it to the poor and homeless in America. It is undeniable that this is something done from despair, however, the court says he cannot justify his actions with the cruel situation they are living. The law will punish him, but in a fair world I think we should have more Robin Hoods acting for justice.

Almost at the end of the week and having released Iron Man 3 a week ago, this video is ideal to gear us up for the weekend. A group of Marvel’s fans have come up with a great parody of the film’s trailer with a tiny budget. This new trailer recreates every single scene of the original one with kind of a different approach. To meet the budget, Tony Sparker’s suit is made from cardboard while Pepper loses all her beauty to become a man in a wig. It could sound a waste of time but the result is extraordinarily hilarious and in less than a week it has already reached 95,000 online hits.
http://metro.co.uk/2013/05/01/is-this-iron-man-3-parody-trailer-better-than-the-original-3709088/