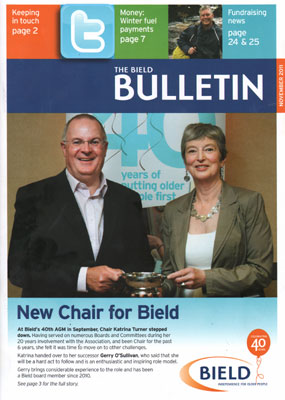 Bield’s Stockbridge care home scored a national award for its customer service which landed it a slice of coverage in the Care Industry News.

The care home was one of the few services to achieve the Customer Service Excellence Award – a government backed award which is internally assessed on the merit that the service can prove its operating at the national standard for customer service.

Bield encouraged Stockbridge to apply for the award as part of its commitment to constant improvement and service excellence.

Over a seven month period the care home home provided evidence to support its application for the award in addition to holding an open day which involved an internal inspector speaking to families of residents at the service.

Brian Logan, Chief Executive of Bield said: “We are delighted that we chose Stockbridge as one of the first services to apply for a customer services excellence award.

“After some careful thought and consideration we decided that this award would be one in which we would eventually all of our services to apply as we believe they are all doing some great things which should be recognised.”

The full article can be found on the Care Industry News website and was achieved on behalf of Bield thanks to a PR campaign with Holyrood PR.