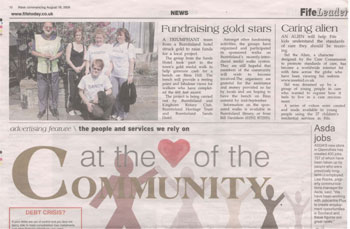 The organisation was featured in the Fife Leader, which reported on how Sid the Alien had proved a worldwide hit with people around the globe visiting the character’s website.

Meet Sid was a concept designed to help young people in care across Scotland recognise the standards of care they are entitled to receive. Sid’s rationale was based around the fact that the standards should be understandable to everyone – even an alien landing on earth for the first time.

A range of social networking pages were created for the character, which were intended to be used by young people in Scotland. However, the character has proved an international hit – with people from the USA, Canada and Japan now following his web profiles.