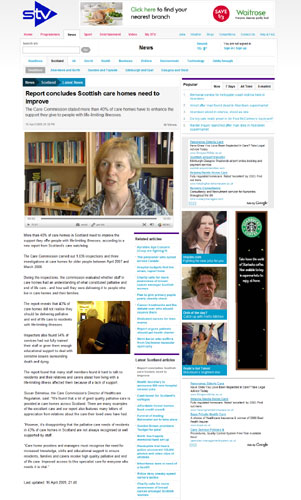 A report by the Care Commission on the quality of palliative care being delivered in Scotland’s care homes has received widespread broadcast coverage.

Susan Brimelow, the Director of Healthcare Regulation, was interviewed on stv and gmtv’s morning news bulletins as well as being interviewed on Radio Scotland’s Good Morning Scotland programme.

The report – and the general of issue of standards in care homes – also sparked a lively debate on BBC Radio Scotland’s Morning Extra show.

The report, which also received considerable coverage in the print media, revealed how more than 40% of care homes in Scotland need to improve the support they offer people with life-limiting illnesses and those who require palliative and end of life care.