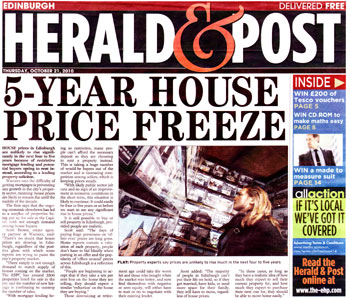 Property firm Warners has received a PR in Edinburgh boost after winning coverage in the city’s high profile weekly paper.

The Herald & Post ran a front page article on the firm after it revealed its latest proiperty analysis about the Capital’s housing market.

Estate agency partner Scott Brown told the paper that he did not expect Edinburgh to see any significant rise in house prices for the next five years, due to restrictive mortgage lending. He said that buyers and sellers were likely to be more realistic about house prices in the coming years and that the city’s housing market would remain flat and stable as a result.

Warners enjoys a strong PR in Edinburgh profile thanks to an ongoing media campaign led by public relations in Scotland experts the Holyrood PR.