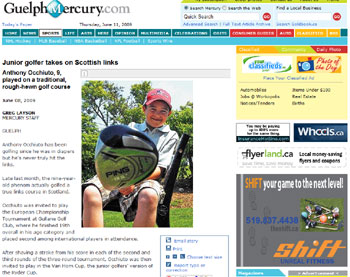 The U.S. Kids Golf European Championship has scored another piece of high-profile media coverage after being featured in a leading newspaper in Canada.

The Guelph Mercury ran an article about how local youngster Anthony Occhiuto had come 19th in his age group at the event – which was the first time he had ever participated on a Scottish links course.

Anthony was one of 430 youngsters from 34 countries to compete at the event, which was held on five courses in East Lothian last month. Young golfers were separated into different age and gender groups before battling it out on the links for qualifying spots at this year’s U.S. Kids Golf World Championship at Pinehurst.

The full article appeared in the Guelph Mercury and was the result of an ongoing media strategy from Holyrood PR PR in Scotland.