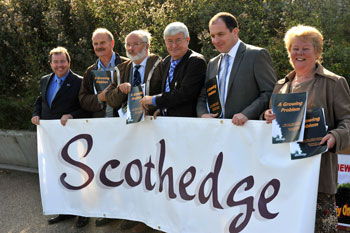 Campaign group Scothedge is stepping up its fight to prevent the problem of divisive high hedge disputes in Scotland by highlighting the issue to MSPs across the country.

Scothedge – which represents hundreds of people who have had their lives blighted by thoughtless and sometimes malicious neighbours who grow outsized hedges, trees and shrubs – has presented a major dossier to every MSP in the Scottish Parliament in the hope of further promoting the issue of “hedge rage”.

The campaign group has sent MSPs a copy of its in-depth paper A Growing Problem, which highlights the issue of high hedges and the problems faced by victims throughout the country. Scothedge is now seeking to encourage MSPs all over Scotland to encourage their constituents to take the advantage of the Public Consultancy “High Hedges and other Nuisance Vegetation” and make their views known to the Scottish Government before the consultancy ends on 13th November.

Scothedge campaign leader Dr Colin Watson said: “We have been fighting for years against the problem of ‘vegetation tyranny’ caused by high hedges in Scotland and the effect it can have on victims’ lives.

“Although the majority of problems caused by high hedges are usually settled amicably, there are many instances where hedge owners refuse to do anything to resolve these issues in the knowledge that the law cannot challenge them

“In England and Wales there was legislation passed in 2003 to help address the problem, but in Scotland there is no legal framework in place to help victims. There is also still a perception that this is a minor neighbour dispute problem, but this is not the case at all – it is a serious issue that, in the most extreme cases, can leave people living in terror from threats of violence and the need to involve the police and can severely reduce the value of a home and garden.

“It is ridiculous that you must get approval from your local council to build almost anything more than two metres high, yet thanks to poor legislation you don’t have to have permission to grow a 10 metre hedge that dwarfs your neighbour’s house and progressively destroys their reasonable enjoyment of a home.

“We’re delighted that the Scottish Government has decided to hold a consultation into the issue in order to explore whether new legislation can be introduced to help victims – many of whom who are currently locked in ugly and often abusive disputes with their neighbours.

“We have already presented all MSPs with our paper A Growing Problem, which has been written by our policy director Derek Park. This document fully explores the issues and argues the need for a change in legislation based upon a decade of Scothedge’s experience of representing the Scottish victims of damaging Leylandii and other trees and shrubs which destroy their quality of life.

“Many people across the country are finding themselves in this situation with nowhere to turn. There is a legal vacuum which needs to be addressed urgently because this problem is not disappearing, it is getting worse.”

Scothedge has been running for more than a decade and has hundreds of members across the country, many of whom live in fear as a result of incessant and sometimes vicious disputes with neighbours over vegetation growth.  The victims argue that overgrown vegetation can:

Successful PR in Scotland for Scothedge

Nothern Ireland is also currently seeking similar legislation to secure arbitration where neighbours are driven to personal dispute by the issue of high hedges and shrubs.

Since Community Safety Minister Fergus Ewing launched the Scottish Government’s Consultation on High Hedges and Other Nuisance Vegetation last month, Scothedge says its membership has doubled as more and more people have come forward to highlight their own problems with high hedge disputes.