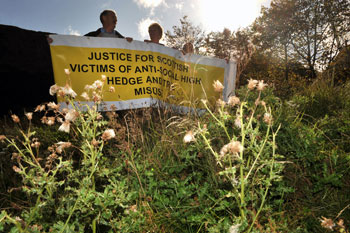 Campaign group Scothedge is stepping up its fight to prevent the problem of divisive high hedge disputes across the country by bringing the issue to the Scottish Parliament.

Victims of “hedge rage” from across Scotland will take part in a demonstration at the Scottish Parliament building in Edinburgh, where they will lobby MSPs and call for new legislation to be introduced to tackle the problem of high hedges.

The demonstration has been organised by Scothedge, which represents hundreds of people who have had their lives blighted by thoughtless and sometimes malicious neighbours who grow outsized hedges, trees and shrubs.

The group has already presented a major dossier – A Growing Problem – to every MSP in the Scottish Parliament to promote and highlight the issue of “hedge rage”. Now it aims to further drive home the message by bringing MSPs face to face with high hedge victims whose lives have been ruined by the problem.

Campaign organiser Dr Colin Watson said: “In England and Wales there was legislation passed in 2003 to help address the problem of high hedges, but in Scotland there is no legal framework in place to help victims. It has created a vacuum that needs to be addressed urgently, because the problem is not disappearing, it is getting worse.

“Under the current scenario there is no legislation in place to regulate garden hedges, so you can potentially end up with an oppressive 50ft high row of trees or shrubs next to your home.

“We regularly hear of instances where there has been a dispute between neighbours over the height of garden vegetation, but the hedge owners have refused to do anything to resolve these issues. The frustrating thing is that there is nothing anybody can do in these cases, including the courts or the local authority.

“In some extreme cases, there are people living in terror from threats of violence and the need to involve the police – just because their neighbour is refusing to see sense and reason over the height of their hedge. It is a serious issue that needs to be addressed immediately by our politicians.

“We have already highlighted this issue to MSPs and have presented them with our dossier A Growing Problem which explains what the problems are and how they are affecting people across Scotland.

“However, with this demonstration we hope to drive home the message and show our elected representatives exactly how divisive and problematic the issue of ‘vegetation tyranny’ is.

“By bringing along victims who are suffering from these issues and having them tell MSPs about their experiences, we will show the Scottish Parliament just how important it is that new legislation is introduced to tackle the problem.”

Scothedge has been running for more than a decade and has hundreds of members across the country, many of whom live in fear as a result of incessant and sometimes vicious disputes with neighbours over vegetation growth.  The victims argue that overgrown vegetation can:

Since Community Safety Minister Fergus Ewing launched the Scottish Government’s Consultation on High Hedges and Other Nuisance Vegetation last month, Scothedge says its membership has more than doubled as more and more people have come forward to highlight their own problems with high hedge disputes.