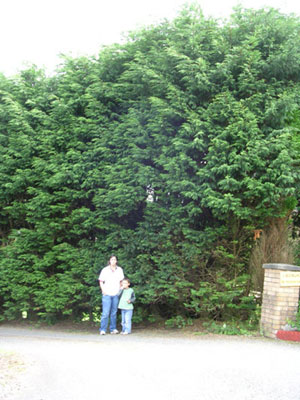 Victims of divisive high hedge disputes in Scotland are being urged to play their part to help convince the Scottish Government to finally bring in legislation to tackle the problem.

Campaign group Scothedge believes thousands of people in Scotland have their lives blighted by thoughtless and sometimes malicious neighbours who grow outsized hedges, trees and shrubs.

Now they are launching a nationwide campaign to highlight a Scottish Government consultation which is attempting to measure the scale of the issue and to seek views on how disputes could be effectively resolved.

The group has been running for more than a decade and has 250 members, many of whom live in fear as a result of incessant and sometimes vicious disputes with neighbours over vegetation growth.

Campaign leader Dr Colin Watson said: “We call it vegetation tyranny and the effect it can have on a victim’s life is quite profound. In the most extreme cases it can leave people living in terror from threats of violence and the need to involve the police.”

The victims argue that overgrown vegetation can:

Dr Watson added: “In the vast majority of cases these hedge problems are something that can be settled quite amicably between reasonable neighbours over a cup of tea – and that is what usually happens.

“However, if the hedge owner is bloody minded about it, then there is nothing anybody can do, including the courts or the local authority.

“We tend to find the people who are suffering are often more vulnerable – widows, retirees, and those with disabilities, whose homes are their sole refuge and main asset.

“However literally anyone can find themselves in this situation with nowhere to turn. There is a legal vacuum which needs to be addressed urgently because this problem is not disappearing, it is getting worse.

“It is ridiculous that you must get approval from your local council to build almost anything more than two metres high, yet thanks to poor legislation you don’t have to have permission to grow a 10 metre hedge that dwarfs your neighbour’s house and progressively destroys their reasonable enjoyment of a home.”

PR in Scotland helps the cause

Dr Watson and the ScotHedge members are delighted that Community Safety Minister Fergus Ewing has announced a Government consultation on the issue, which will run until November.

After two previous consultations and failures to legislate, in part because they were a Private Members’ Bill and not a government-sponsored Bill, Scothedge is confident that justice will prevail this time around.

Dr Watson added: “The English legislation isn’t perfect – but in Scotland we have a chance to go a step further, address the flaws which still exist south of the border and come up with a legal solution Scotland can be proud of.

“However, we need anyone who is afflicted by problem trees and hedges to come forward and make their voices heard by responding to the consultation.

“There is still a perception that this is a minor neighbour dispute problem. It is not. It is sustained by legislation which inhibits resolution and we need to let the Scottish Government know that in no uncertain terms.”

You can see examples of how people’s lives are blighted by overgrown hedges, trees and shrubs in a photo gallery at the Holyrood PR website.

Scottish public relations agency Holyrood PR is working with Scothedge to highlight its campaign through expert us of PR in Scotland.