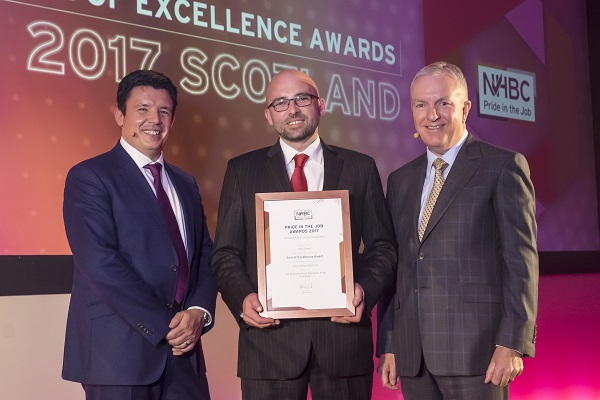 THREE Site Managers from CALA Homes have each scooped a highly prized accolade in recognition of their work at the highest standards of the housebuilding industry.

The developer was celebrating at the NHBC Pride in the Job Regional Awards, held at Glasgow’s Hilton.

For CALA Homes (East), Mark Foley was recognised for his work at Dalmeny Park, South Queensferry, with a Seal of Excellence, along with Neal Toland, Site Manager at the firm’s hugely successful Ten Brunswick Road development in Edinburgh.

Stuart Dallas, of CALA Homes (West) was rewarded for his work at Thorntonhall, South Lanarkshire, with the three CALA representatives making up one quarter of all winners.

Adding to the success from the night, Neal Toland also scooped one of four Regional Awards for Ten Brunswick Road in the NHBC multi-storey category and will now be put forward for the UK-wide ceremony early next year.

Kevin Whitaker, Regional Chairman for CALA Homes, commended the Managers on setting uncompromising standards and praised their wider development teams for their invaluable and sustained support.

He said: “We are very proud of Mark, Neal and Stuart for obtaining the Seal of Excellence and for Neal’s further achievement in winning a regional prize.

“Standards on development are set by our Site Managers and these three developments epitomise what CALA sets out to achieve about across the group, in terms of quality.

“An award of this nature is testament to the professionalism and expertise of our Site Managers who set the standards of excellence – and their ability to engender this between our staff on site and our valued subcontractors.

“We also recognise that the planning and delivery of great developments would not be possible without the support, hard work and talent of the regional office teams.”

Earlier at the luncheon, alongside the three Seal of Excellence winners, eight of CALA Homes’ project managers in Scotland (announced in June), were recognised with Pride in the Job awards.

“It has recently sold out, three months ahead of schedule, bringing the entire build forward.

“Seeing such demand for the homes you are building along with the families and professionals that move into them remains such a special part of the job.

“I’m delighted that the team’s work on this site has now been recognised at the regional level and we look forward to the National Awards early next year.”

Organised by NHBC, the UK’s leading new home warranty insurance provider, “Pride in the Job” is the most highly regarded competition in the house building industry dedicated to recognising site managers and their construction teams who achieve the highest standards in house building. It has been instrumental in driving up the quality of new homes for 37 years.

Following the conclusion of the NHBC Pride in the Job Regional Awards ceremonies, the winners of the UK Supreme Awards will be announced at a gala ceremony in London in January 2018.