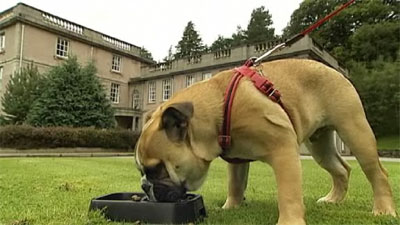 Humphrey the bulldog puppy has earned some priceless media coverage after taking up his new role at an innovative Scottish care service.

The lovable pooch has taken up a new position to provide friendship and company to older people who live at Inchmarlo Retirement Village.

He has already proved a huge hit with many of the residents at the stunning Royal Deeside estate.

Humphrey visits those staying in the Georgian manision house which has been converted into a luxury care home.

He is also finding many fans among the home owners living in the apartments and houses in the grounds of the estate, which are sold to people over 55.

The innovative community offers peopel the chance to enjoy independent living in the beautiful setting, with the option of care on site if and when they require it.

It is the brainchild of Professor Charles Skene, who also introduced Humphrey to his new role as Therapy Assistant (Canine).

When STV news crews learned about the popular pooch’s new position, they spend a day at Inchmarlo filming him in action